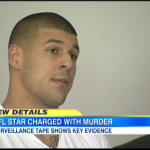 Yesterday, the New England Patriots dropped Aaron Hernandez from the team only an hour after the report of his arrest was released.  Aaron Hernandez was arrested and arraigned yesterday.  He is charged with one account of murder and five other gun-related charges.  On Good Morning America this morning, Dan appeared to discuss how circumstantial is the Hernandez case.  He says, “It may be a strong one. You’re talking about surveillance tapes, cell phone text messages, physical evidence, shell casings, a piece of bubble gum near a shell casing. You have the destroyed surveillance tapes.  A cell phone that’s handed over in pieces. It’s true this is a circumstantial case. But prosecutors seem to be able to piece together everything.  They’ve gone minute-by-minute, to piece together almost everything they believe happened. They’re not saying that Hernandez pulled the trigger. But that doesn’t matter in a murder charge.  They used the phrase, ‘orchestrated the execution.’ They are saying he pulled the trigger. They see him with the gun.  They see him with the gun walking in, afterwards, et cetera. They wouldn’t need that to convict him of murder. What they don’t seem to have is a powerful motive.”  Watch the segment here.