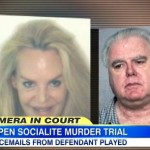 Dan was on Good Morning America Friday, March 7th to discuss the latest on the Aspen socialite, Pamela Phillips who is currently on trial, accused of her former husband’s car bomb death in 1996. Prosecutors say Phillips, 56, agreed to pay Ron Young $400,000 to kill her former husband, Gary Triano. Young is currently serving life in prison for planting a pipe bomb in the real estate developer’s car. But the jurors are not allowed to consider his case in this trial. On Thursday, March 6th jurors heard a series of phone conversations Phillips had with the convicted hit man, Ron Young. Phillips never admits to committing a crime on the tapes, and she has pleaded not guilty to the charges of first-degree murder and conspiracy to commit murder. Says Dan, “The key for the prosecution is linking Phillips to Young. It’s a very powerful case. You’ve got witnesses in this case who say she’d talked about killing [Triano]. The most important aspect is that she was paying his insurance policy. And now they are looping it back to the connection with Young.” Watch the full clip here.