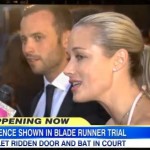 Dan appeared on Good Morning America, Wednesday, March 12th to discuss the latest on the ongoing Oscar Pistorius trial. On Wednesday day in court there was a mock-up constructed of the bathroom in which Pistorius first shot his girlfriend and then used a cricket bat to break down the door. The issue is his credibility and that is exactly what the prosecution is trying to taint. Pistorius stated in his bail hearing, when he realized it was his girlfriend and not an intruders locked inside this bathroom, he battered it down with a bat after putting his prosthetics back on. Says Dan, “They want to show Oscar Pistorius was not telling the truth at his bail hearing. Remember, his account was he’s in the bathroom. He thinks it’s an intruder. He fires the weapon. Then runs without his prosthetics on and runs back into the bedroom screaming for help. Puts his prosthetics back on. Runs back into the bathroom with the prosthetics on. Why this expert becomes so important is undermining that and saying, no, wait, based on the angle we see, he believes that the bat was swung from a much lower level and could show Pistorius is lying.” Watch the full clip here.