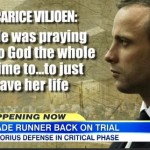 Dan discussed the Oscar Pistorius trial on Good Morning America, Monday May 5th, which resumed after a two and a half week break. The defense, trying to poke holes in the prosecution’s case, has supposedly claimed that they haven’t begun the heart of their case. Pistorius’ neighbor Johan Stander and his daughter,Carice Viljoen, emotionally testified for the defense. Stander was the first person Pistorius called after shooting his girlfriend and while on the stand, Stander described the events of that night moments after Steenkamp was shot when he arrived, and Pistorius’ demeanor, which all support Pistorius’ claim, that he mistakenly shot Steenkamp thinking she was an intruder. His daughter Carice, nearly broke down on the stand saying she feared Pistorius was going to shoot himself that night after what he had done. These witnesses also claim they did not hear the fight that other witnesses claim to have heard that night. Says Dan, “I think the most important testimony you’ve heard so far from this witness today is that another witness may have changed his story.Meaning these ear-witnesses are so important, witnesses who hear a fight, followed by the shots, right. The defense is saying that’s not the way it happened. Remember, if there was a fight, followed by shots he’s in big trouble, so you had these ear-witnesses who say they heard that fight, you had the witness today say, well, I talked to one of those witnesses at the time and he offered a different account than he offered on the witness stand, that is somewhat helpful and I would argue the most helpful thing we’ve heard today but still they got a long way to go.” Watch the full clip, which includes comments from Nancy Grace, here.