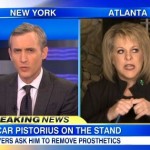 Dan was on Good Morning America, Tuesday April 8th alongside of Nancy Grace, host of HLN’s “Nancy Grace”, to discuss Oscar Pistorius taking the stand in his own trial. While retelling what happened the night Pistorius shot and killed Steenkamp, he breaks down on the stand sobbing, additionally lawyers asked Pistorius to remove his prosthetic legs during this testimony. Pistorius claims he believed Steenkamp to be in bed when he got out his gun to shoot the “intruder” but the evidence doesn’t necessarily match up. Says Dan, “Going for the gun is crucial. This is what he sort of glossed over in his direct examination. He is saying that the gun is under the bed. He’s claiming that Reeva — he thinks Reeva is in the bed. And he’s going under the bed to get the gun out. Now, he described it sort of feeling the side of the bed in what he says is a dark room that he feels under the bed. And then, goes under and grabs his gun. That’s, I think, the most difficult for him to explain, which is how could you not have known that she wasn’t in the bed?” Watch the full clip here.