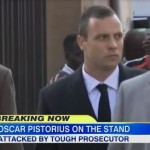 Dan appeared on Good Morning America to discuss the latest in the Oscar Pistorius trial. Pistorius took the stand in his trial and underwent a ruthless cross examination from the prosecution. ABC’s Matt Gutman reported from South Africa that prosecution were forcing Pistorius to view graphic images that caused people to avert their gaze, demanding again and again, that he take responsibility for killing his girlfriend. Pistorius admits to killing Steenkamp but has announced,  “I did not intend to kill Reeva or anybody else.” Pistorius has proven to be very emotional on the stand to the point where the judge had to adjourn for the day at one point. Says Dan, ” The prosecutor has to be careful not to want the judge or the assessors to feel sorry for Pistorius. And Pistorius has to be careful here, if he’s crying all the time, and constantly, not to say he’s not upset or whatever the case may be, but that can also work against him because this is about his credibility. This is about, do they believe him? And if he’s crying at every point, that can detract.” Watch the full clip here.