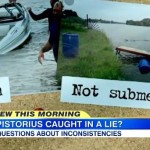 Dan joined the Good Morning America team on Thursday, April 24th to discuss the South Africa report claiming that Oscar Pistorius lied on the stand during his testimony about a 2009 boat crash that left him in a coma. Pistorius described the boat crash saying he smashed into a submerged pier as the sun was setting obscuring his vision. However, an eyewitness reported to a South Africa media outlet, the Daily Maverick,  that there was no sun because it was already dark and the pier was not actually submerged and Pistorius’ representatives have declined to comment on this report. Says Dan, “I don’t think the boating accident is going to be a make or break issue in this case but if prosecutors can prove that he lied about it, that could certainly impact his credibility.” Watch the full clip here.