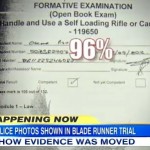 Dan was on Good Morning America this Tuesday to discuss the latest on Oscar Pistorius. An expert on firearms testified in the case on March 18th and Dan discusses the impact. Says Dan, “It shows that Pistorius knew better. He knew he’s not allowed to shoot behind that door. Even if, even if he feared there was an intruder. That is really important because if the judge has questions, let’s say the judge is saying, you know what, I do have doubt as to whether he thought that maybe there was an intruder, maybe I will buy that as a possibility here, this sort of testimony seems to ensure that he gets a conviction on a lesser conviction of culpable homicide. What does that mean? It means that at the very least it was reckless or negligent action on his part.” Watch the full clip here