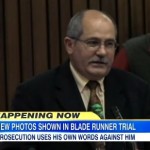 Dan appeared on Good Morning America, Monday, March 17th to discuss the latest on the ongoing Oscar Pistorius trial with Nancy Grace. A former police officer was grilled during the trial about mishandling the evidence. Does this matter? Says Dan, “Some of it really matters and some of it doesn’t really matter. Meaning, I’m not as concerned about the allegations of, were certain pieces of evidence held in the locker versus somewhere else.  That is less significant to me than the allegations that evidence may have been moved before photographed. Why is that important? Because it will either back up or undermine Oscar Pistorius’ own account.” Watch the full clip here.