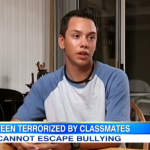 Dan appeared on Good Morning America today to discuss a group of California teens who were arrested for alleged online bullying. The male students in a San Diego high school formed the “KKK” or “Kill Katie Klub” to terrorize a fellow female student. Those students say their intention was never to hurt her, but Katie’s mom kept evidence such as recorded phone calls and social media postings against the boys. She hired a lawyer, and now the two accused bullies face criminal charges. Dan weighs in: “You have to take yourself back away from the idea of bullying and schools, and just ask yourself if ‘x’ happened outside of the school arena, if it wasn’t kids you’re talking about, but adults – would it be a crime?  …So the question is, how threating are the calls, was this an actual group – this Kill Katie Club, because, look, if this was a real group where they had some actual intention, this wouldn’t be a misdemeanor case, this would be far more serious than that.” And while it currently stands as a misdemeanor case, Dan says it’s clear the authorities are taking it seriously. For more, including whether the school could face liability, watch the segment here.