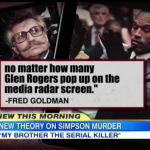 A new documentary about the O.J. Simpson case is set to air today on Investigation Discovery. Titled “My Brother the Serial Killer,” it claims that Glen Rogers, a convicted serial killer currently on death row, killed O.J. Simpson’s ex-wife Nicole Brown Simpson and her friend Ron Goldman in 1994. Six weeks after Simpson, the famous football player, was acquitted of the murders, Rogers was arrested. Police said Rogers went on a nationwide killing spree, allegedly murdering more than 70 people. So what does Dan make of all of this? On Good Morning America yesterday, Dan weighed in: “The filmmaker has created a compelling case here; the problem is it doesn’t deal with the enormous amount of evidence pointing at O.J. Simpson.” Watch the segment here.