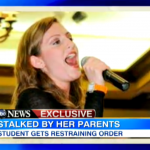 Dan appeared on Good Morning America today to discuss a unique stalking order court case out of Ohio, in which a student won a restraining order against controlling parents. Aubrey Ireland, 21, is a music theater major at the University of Cincinnati, and claimed her parents, David and Julie Ireland, would often drive 600 miles to her school unannounced and even tracked her via computer and cell phone. “What’s really sad about this case is you’ve got parents who agreed pay the tuition for her daughter because they wanted her to go to the best school – remember, she’d gotten scholarship offers at other schools,” begins Dan. As for the allegations her parents made, such as drug use, he continues, “Could she sue them for saying that she’s doing drugs if it’s not true? Sure. I can’t imagine that’s where she wants to go right now. I get the sense she wants to get her parents out of her life.” So what could happen to her parents now that the restraining order is in place? “If she reports that her parents have violated the order… they could be in real criminal trouble, so they have to be very careful here about what they do,” answers Dan. Watch the full segment here.