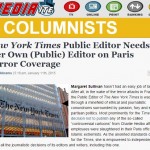 Dan wrote a piece for Mediaite taking on The New York Times Public Editor, Margaret Sullivan, over coverage of the terror in Paris. The Times chose not to publish any of the Charlie Hedbo cartoons in the wake of the slaughter of 12 employees in their Paris offices. However, Sullivan then pronounced the decision a “close call” and announced there would be a “review and reconsideration” of the standards involved in making the decision. Dan wrote, “Mediaite ​chose to publish the cartoons ​as part of our coverage​ of the attacks​.​ ​Regardless of how one comes down on that issue, what the Times and she, surely should not have done was buy into the terrorist​s​ narrative that the cartoonists​,​ and their work​,​ somehow caused their own deaths.” Read the full post and more coverage here. ​