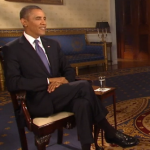 Dan anchored Nightline last night for an episode that focused on the war before the impending war between Obama and Assad as the conflict in Syria continues. Says Dan, “Tonight on Nightline, it’s a war of words between President Obama… and Syrian President Assad… both throwing everything they have into a media blitz, reaching a boiling point. The verbal war… reached a fever pitch. With Congress and the American people debating what to do in response to that chemical weapons attack in Syria, Assad in his first interview with an American journalist since the incident denied he was responsible and suggested there would be repercussions if the Americans take actions. Just hours ago, President Obama responded to ABC’s Diane Sawyer.” See what he had to say, as well as other segments focusing on alligator hunting (growing to over 700 pounds in the Mississippi Delta!) and the skeptics confronting Diana Nyad’s record breaking swim from Cuba to Florida. Watch the full episode here.