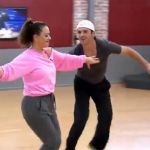 Dan anchored Nightline last night for an episode that covered three of the hottest topics in recent news. Shifting from the mall attack in Kenya to the end of Michael Jackson’s death trial to Dancing With the Stars celeb Leah Remini’s decision to leave the church of scientology, Dan and Nightline keep you up-to-date. Says Dan of the stories, respectively, “Could it happen here? The question’s just beginning about the al-Qaeda linked terrorists behind the Nairobi mall attack… we go to the heartland to find out more.” And, After five months and fifty witnesses, closing arguments underway in the Michael Jackson wrongful death trial. His mother and children asking for $1.5 billion, but could they walk away empty handed?” Finally, “Leaving Scientology: Leah Remini goes after the Church on Dancing with the Stars… the Church responds to it’s high-profile former believer… so what happens now?” For answers to all of these questions and more, watch the full episode here.