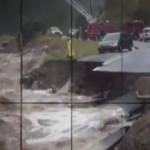 Dan anchored Nightline last night in an episode that focused on two major breaking and tragic news stories of the day: the Navy Yard shooting in DC, and the ongoing floods in Colorado. Says Dan, “A shooting rampage at a major Navy facility sends the nation’s capital into chaos and the Senate into lockdown. With at least twelve dead plus the shooter, officials look for a motive – and were there others involved? …And in Colorado, rescue helicopters head in after days of floods. With the death toll climbing, hundreds unaccounted for, and more rain coming, is there an end in sight to this almost biblical flood?” Watch the full episode, including a segment on the Miss America controversy, here.