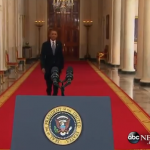 Dan anchored Nightline again last night for an episode that focused on many hot topics of the day, including Obama’s speech on Syria, the raging forest fires, and the YouTube drunk driving confession that went viral. Of the speech, Dan asks, “Defining moment: President Obama makes his plea to a skeptical American public for military action against Syria… but is it too late?” Of the forest fires, Dan asks, “Nineteen firefighters perished, but did they have to die? There have never been more forest fires, or less resources to fight them. Is an aging fleet of tanker planes putting lives at risk?” And of the YouTube confession, Dan sayss, “An Ohio man confesses on YouTube that he killed a man. That drunk driver was in court today and things did not go as planned.”  For answers and the full episode, watch here.