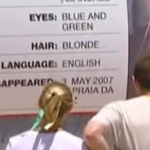 Dan was behind the Nightline anchor desk last night as the show told the latest in the still unsolved case of Madeline McCann, kidnapped while the family was vacationing in Portugal when she was three years old. Now, a reconstruction of events from the night she was taken in 2007 by Scotland Yard was televised last night in hopes that it will turn up more information on their “person of interest.” Says Dan, “There could be a major breakthrough tonight in the case of little Madeline McCann, plucked from her bed while her parents were having dinner just steps away. Authorities have taken a new look at this high profile case and tonight, announced a new timeline along with some computer generated images of a person of interest they have some questions for.” For more, watch the full episode here.