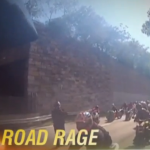 Dan anchored the first October episode of Nightline last night, discussing the road rage video that went viral this week, a shutdown showdown, as well as the start of “ABC Goes Pink” for Breast Cancer Awareness month. Dan begns, “A busy New York city street in the middle of the day – a frightening scene as motorcyclists confront a family and their SUV, and the driver’sruns over one in his path – now the injured biker’s family is blaming the driver – was it self defense?” And not only was yesterday the first day of October and Breast Cancer Awareness month, it was also the first day of ObamaCare – so Nightline is sharing a tale of two cities: “Two women: one rich, one poor, but they share a diagnosis… on the first day of ObamaCare, it’s an inspiring tale… and this crusader’s journey of hope.”  For more, including a segment on the shutdown and what it means for you, watch the full episode here.