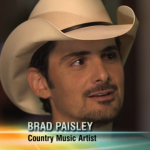 Dan anchored Nightline last night for an episode regarding lies, deceit and a huge hoax affecting various celebrities. Brad Paisley and his wife, Kimberly Williams-Paisley, were sucked into a cruel and elaborate internet hoax, when they were led to believe they were helping a sick and dying child.  Says Dan, ”  You’re probably familiar with the term catfishing, people adopting false identities online to gain trust, love and sometimes even money. Tonight, a year long Nightline investigation follows a trail of deceit like no other, and in this one the victims were often celebrities, including tonight’s Country Music Awards host, Brad Paisley and his wife, for Brad and Kim the chance to help a dying child seemed like a beautiful gift, until it all turned out to be an ugly lie.”  To watch the full episode, which also includes a recap of the Stand Up For Heros event, go here.