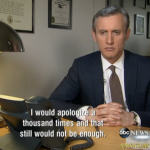 Dan appeared on Nightline to speak with one of the jurors in the Ryan Ferguson case.  After serving years in prison for a crime he maintained he did not commit, Ryan Ferguson is finally a free man. Tonight, Dan spoke with one of the jurors from the trial who says, “In the back of my mind, I always thought maybe he was innocent.” The juror explains why they unanimously convicted Ferguson and expresses his deep regret and apologies. Dan asks the juror, “What would you say to him?” Watch the full clip including interviews with Ryan, his father Bill and his attorney here.