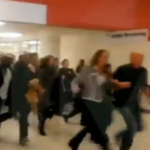 Dan anchored Nightline for an episode that included the latest on the shooting at LAX that occurred Friday afternoon. Says Dan, “LAX Under Fire: A shooter gets through with a rifle, killing a TSA officer and injuring others. Tonight the heart-stopping details of the panic at the airport and the anti-government 23-year old accused of being behind it all… How did he make it through security? And what was his motive?” To watch the full episode, which also included stories on the world’s hottest peppers and Hallmark, click here.