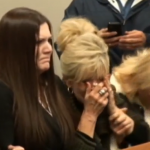 Dan anchored last Friday on Nightline in an episode that dealt with an array of topics from the MacNeill murder trial to Tori Spelling to a Russian Police choir. The episode begins discussing the trial of Dr. Martin MacNeill, where a verdict was finally reached regarding the fate of Dr. Martin MacNeill and it was not what he had hoped to hear. Says Dan, ” The Utah doctor had been charged with murdering his wife in the bathtub of their suburban home. The star witnesses? MacNeill’s own daughters, who were single handedly  responsible for bringing charges against their own father… Now a  jury of 5 men and 3 women decided there was proof beyond a reasonable doubt of his guilt” To watch the full episode, which includes a tell all interview with Tori Spelling as well as a very interesting feedfrenzy about a new kind of  singing group ( think The Police, literally)
click here.