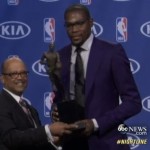 Dan was behind the anchor desk of Nightline on Wednesday, May 7th. This episode began with a look at a growing trend- “bikini baristas”. Controversy has sparked over road side coffee stands popping up in Washington where the baristas are serving coffee, barely clothed. Some mothers in the area are not happy about this and are campaigning to get indecent exposure laws changed in order to stop the baristas from working nearly naked. Next, Nightline sits down for an exclusive interview with Samantha Pitard, one of the circus performers who suffered injuries from the terrible accident while performing the “human chandelier”, one of the most dangerous and painful stunts. During this stunt the performers are suspended in the air, hanging by their hair, Nightline hears from Pitard about what was going through her mind that moment everything came crashing down. Finally, the last story focuses on NBA star Kevin Durant who was named MVP of the league. During his speech, Durant gets emotion as he thanks the one person to whom he owes it all, and the true MVP in his eyes, his mother. Watch the clip and the full episode here.