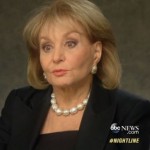 Dan was behind the anchor desk of Nightline on Friday, May 16th in an interesting episode that ended with a tribute to the legendary Barbara Walters. The first story was a piece on a new diet trend called the “Whole 30”. As the name suggests, the diet lasts for 30 days and is extremely restrictive offering no “wiggle room” or gray areas with a similar foundation to the Paleo Diet, which only allows dieters to eat things that can be hunted or gathered. The founder calls it a “short term nutritional reset”, which gives dieters an opportunity to develop a new relationship with food and how it affects them. The key to the diet is to slowly reintroduce food groups to your diet to see how your body reacts to them.  The next piece also deals with how you body reacts but in a different sense. Nightline gives a behind-the-scenes look at what it is like to go in a sensory deprivation tank.  Finally, the last segment takes a look at some of the most unforgettable interviews done by ABC legend, Barbara Walters. Watch the full episode here.