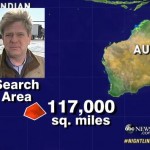 Dan was behind the anchor desk of Nightline on Wednesday, March 20th. The episode featured breaking news on Malaysian Airline’s flight 370.  At least two objects, possibly related to the missing plane, have been spotted on satellite imagery off the coast of Australia. American and Australian aircraft were diverted to the location and ABC’s David Wright was on board. Watch the full episode here.