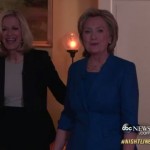 Dan anchored for Nightline on Monday, June 9th. The episode began with new details about the “Vegas Cop Killers”, a radical young married couple who ambushed a pizza parlor over the weekend, killing two cops at point blank range. Nightline explores what was behind this violent rampage and the potential warning signs. Next ABC’s Diane Sawyer sits down with former first lady, Hillary Clinton, for an ABC exclusive discussing how Clinton’s life has changed over the years and what might be in her future. Finally, Nightline goes behind the scenes with the most-tweeted show in television history, Pretty Little Liars. With it’s fifth season about to premier, Nightline talks with the cast and crew of the hit show to see what it is like on set and how social media has impacted the show’s continued success. Watch the full episode here.