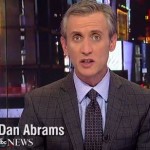 Dan was behind the anchor desk of Nightline on Friday, June 6th.  This episode began with a story about the Phoenix arson squad, arguably one of the best in the country, who are under investigation for making some questionable arrests. They are the best of the best when it comes to arson squads as their numbers show in the amount of arrests they’ve made but is it at the expense of innocent victims? Arson is one of the hardest crimes to prove and Nightline speaks with two people who say they were falsely accused by a department they claim has “run amok”. Next up, former first lady, Hillary Clinton sits down with ABC’s Diane Sawyer to discuss her public and private life. The exclusive one-on-one conversation touches on topics including Clinton’s health, her presidential plans, and what she thinks of president Obama’s controversial decision to trade high-level Taliban detainees for sergeant Bowe bergdahl. Watch the full episode of Nightline here.