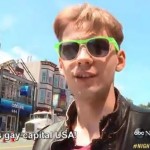 Dan anchored for Nightline on Thursday, June 26th. The episode began with a Nightline investigation on credit card thieves, who are appearing in places that you least expect. A new tread among credit card skimmers is for cashiers to swipe a person’s card twice – once to pay for their order and once to steal the information. Another unsettling discovery? Skimming devices. Credit card thieves are putting tiny skimming devices into credit card slots at gas pumps to steal your information discreetly. What is the government doing to prevent this? Nightline finds the answer. Next, Nightline follows a Russian drag performer who fled from his home country to the United States after repeated attacks on his place of work. Finally, Nightline is joined by Barbara Walters for a sneak peak of her exclusive interview with Peter Rodger, the father of the UC Santa Barbara shooter. Watch the full episode here.