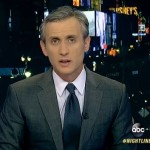 Dan was behind the anchor desk of Nightline on Monday, June 2nd. This episode of Nightline began with the latest on the deal that was made to rescue POW, Bowe Bengdahl, and why his fellow soldiers are calling him a deserter. America chose to trade five high-ranking members of the Taliban, held in Guantanamo Bay, in exchange for Bengdahl’s release, now some of his fellow soldiers are coming forward and saying that Bengdahl walked out and should be punished, not celebrated. The next story looks at some unlikely celebrities who have made it big on YouTube. From make-up artists, to online chefs, to fashionistas, YouTube stars are an eclectic bunch, bypassing Hollywood and reaching an audience of hundreds of millions. In the Feed Frenzy, Nightline, reports on the story of a 14-year old boy who led police through a wild, high speed car chase through a park, where children were playing and riding bikes. The minor was stopped eventually by a man who used his pickup truck to block the car, fortunately no one was injured. Finally, Nightline goes behind the scenes to see how some of the government’s most secretive branches recruit their employees. Watch the full episode here.