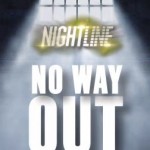 Dan was behind the anchor desk for Nightline on Thursday, June 19th. The first story is an undercover report done by Nightline co-anchor, Dan Harris, called “No Way Out”, that gives a behind the scenes look at a radical experiment done in a solitary confinement prison. An estimated 80,000 people are locked up in solitary confinement and Nightline follows a prison official who wants to experience it firsthand, undercover.  The former cop is hoping to reform New Mexico’s use of solitary confinement and we watch as he spends 48 hours living among the worst of the worst in what is known as “hell on Earth”. The second story for the evening takes a drastic turn from the first and looks at the latest in airport amenities and why some airports are becoming actual destinations. Finally, international superstar, Jennifer Lopez, is coming out with her newest album and released a pretty romantic and steamy video for the her hit, “First Love”, is there more to the story between her and video co-star, model, David Gandy? Watch the full episode here.