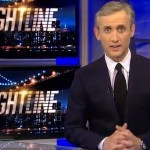 Dan was behind the anchor desk at Nightline for the second day in a row on Tuesday, July 8th. This episode began with a deeper look into the “hot car” case as part of the “Crime and Punishment” series. Justin Ross Harris pleaded not guilty for the death of his 22-month-old son, whom he left in the backseat of his car on a scorching hot day in Georgia. As more details come out about this case not only was Harris not granted bail, his wife is now under intense scrutiny. Next ABC’s Neal Karlinsky goes along for the ride on a coast-to-coast bike race that is the true test of endurance. Race Across America participants have 12 days to make it 3,000 miles which means minimal sleeping and eating. Neal follows one couples journey and they run into an unexpected participant who came all the way from London to participant in this grueling test of endurance.  Watch the full episode here.