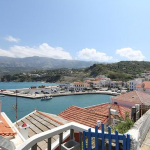 Dan anchored Nightline on Friday evening, and the episode featured a segment about a real fountain of youth: an island in Greece where people live longer than other places in the world. Dan says: “Travel to a remote place in the Aegean Sea where people seem to live longer, happier, and healthier than the rest of us mortals. So what’s their secret?” “Wine and wisdom,” an islander replies. Dan’s Nightline co-anchor Bill Weir traveled to the island to report on this seeming utopia. A twenty-five mile stretch of land surrounded by the sea, it has ten times more siblings over 90 years old than any other place in the world. Of the residents, Bill says: “Many… refuse to get sick or senile, many simply refuse to die.” While the residents age, they don’t suffer the negative health effects of old age such as dementia that many other elders do, and they tend to die peacefully. The segment follows the stories of spunky seniors like 97-year-old Evangelina and 100-year-old Constantinos who still goes to work every day. Other stories in the episode include a new form of parenting and marriage, and a careless UPS worker. Watch the full episode here.