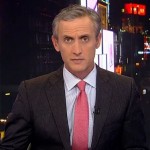 Dan anchored for Nightline on Friday, July 25th, for an episode that covered an array of topics. It began with an alarming, breaking news story about a passenger jet with almost 200 people on board that had to be escorted by two U.S fighter jets after an incident that happened midair. Nightline investigates what happened and why.  Next, an undercover investigation with a special police unit tracks an organized ring of shoplifters. A surprisingly booming business that affects the honest consumer in a way you might not expect. Finally, a 3-year-old golfer is being hailed as the next Tiger Woods and Nightline shows us why.  Watch the full episode, including the Nightline 5, here.