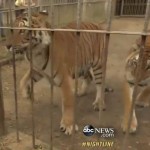 Dan anchored for an episode of Nightline on Thursday, July 10th. This episode began with a look into an alternative style of living. Nightline joined a family who lives at sea 24/7. ABC’s Reena Ninan joined a family of 5, who, 10 months ago, sold everything they had to live on the open sea with their 3 small children. While this may seem like an extreme way to live, this family definitely believes they made the right choice. The next story is part of the Nightline series, “Off the Map”. We follow a woman who takes care of large and potentially dangerous animals that were either abandoned or taken from drug kingpins. What these animals were used for may shock you. The final story of the night takes a deeper look at Hollywood’s baby boom. Which celebrities are expecting their first child and what’s it like for these new parents? Watch the full episode here.