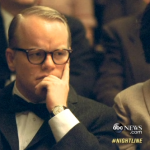 Dan was behind the anchor desk of Nightline on Monday, February 3rd in an episode that began by looking over the last moments of Philip Seymour Hoffman’s life. While know to the public as one of the most diverse actors in the business, behind closed doors Hoffman was fighting an addiction with heroine that sadly claimed his life. Next, Nightline follows the manhunt for an escaped quadruple murderer. Michael David Elliot escaped from a Michigan prison on Sunday night and was finally captured late Monday night but not before Elliot took a woman hostage. Finally Nightline goes behind the scenes of the hottest parties during the Super Bowl. How much does it cost to party like the celebrities? Watch the full episode here.