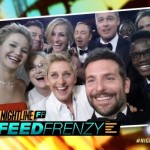 Dan was behind the anchor desk of Nightline on Monday, March 3rd in an episode that covered an array of topics. The first story was about Oscar Pistorius, the international sports star known as “Blade Runner” who is on trial for the murder of his girlfriend, Reeva Steenkamp. Pistorius is claiming he truly believes someone had broken into their home and they were both in grave danger. However, neighbors are saying they heard a “blood curdling” scream before shots were fired. Was this an accident or murder? On a lighter note, the next story investigates a new way fans are watching the bachelor. A website called  TheBachelorBracket.com allows users to predict which contestants will make it into the finals. The Feed Frenzy takes a look at the best and worst moments of the Oscars. Watch the full episode here.