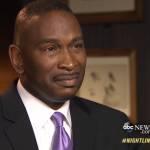 Dan anchored Nightline on February 19th in an episode that first sat town with the parents of Jordan Davis, the teen who was shot and killed by Michael Dunn. Dunn admittedly shot and killed the 17-year old Davis in a gas station parking lot after they got into an argument over loud music but he pleaded self-defense.  Jurors found Dunn guilty on four of five charges for shooting at Davis’ friends, who were also in the car, as well as firing a gun into a car; however,there was mistrial on the first-degree murder charge. Correspondent Byron Pitts sat down for an interview with Jordan Davis’ parents in a Nightline special edition of “Crime and Punishment”. The next segment follows David Wright to the World Food Championship in Las Vegas, where chefs compete for the honor of winning and also some cash prizes. Finally, the Feed Frenzy watches model/actress Kate Upton as she defies gravity for a different kind of bikini photo shoot. Watch the full clip here.