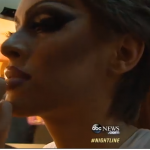 Dan was behind the anchor desk of Nightline on Friday, February 14th for a special edition: Moscow is Burning. In the months leading up to the Olympics in Sochi, Russia’s anti-gay propaganda laws were in the spotlight. Nightline traveled to Russia to see first hand what it really means to be gay in Moscow and what it is like for those people who are constantly under attack.  Russia’s largest gay night club was once a sanctuary and it is now a target. To be young and gay in Russia can be extremely dangerous. Watch the full episode here.