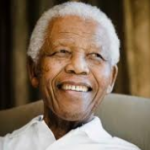 Dan was behind the anchor desk of Nightline on December 5th with an episode that honored and celebrated the life of Nelson Mandela. Says Dan, “Nelson Mandela’s face is one of the most recognizable in the world… from boxer to advocate, prisoner to Peace Prize winner, it seems Mandela was always fighting for a cause greater than himself. As reactions pour in from around the globe, it’s clear that his legacy as a champion of human rights, equality and freedom will forever be etched in our minds and in history.” Mandela died at the age of 95 and is remembered as a leader, a freedom fighter, a symbol of racial equality and someone who will forever inspire the world with his legacy. This episode not only goes live to the streets of South Africa, but also takes a look back at the man who spent nearly three decades in prison but never lost sight of what was important. Those close to him talk about his magnetic sense of humor and his majestic demeanor. Tonight, Nightline also had the opportunity to talk with Aretha Franklin, who had the honor of spending time with Mandela and she shares her memories with us. Watch the full episode here.