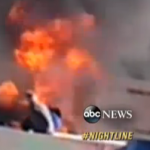 Dan anchored Nightline Thursday December 26th in an episode that covered an array of topics. The first topic looked into a line of gyms for overweight members only. “Downsize Gym” admits only members who have at least 50 pounds to lose. Many people who feel ostracized in gyms have found a home at Downsize Gym, and have managed to lose and keep the weight off.  The next topic looked into the cruise ship stranded and locked by ice in the arctic as it waits for rescuers to come. About 50 tourists, scientists and explorers and 20 crew are on the Russian ship MV Akademik Shokalskiy, which became trapped in heavy sea-ice near Antarctica and sent a distress call on Christmas Day, the passengers seem to be keeping their spirits high as they wait for their rescue to come. The final topic was about a heroic rescue. An off duty office, Don Thompson, was driving by and witnessed a horrific car crash. In a scene most people would run from, Thompson sprang to action rescuing and saving the life of a man from the burning car. Watch the full episode here.