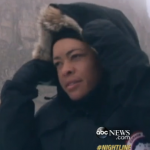 Dan was behind the anchor desk of Nightline for a Special Edition entitled “Unicorns of the Sea”. Nightline journeyed far north to the vast land of the arctic to track the elusive narwhal, a creature you have to see to believe. Says Dan, ” Tonight we take you to the edge of the world, on a quest in search of the elusive creature, known as the unicorn of the sea, the narwhal,  an arctic leviathan, both rare and endangered. What we discovered along the way is a landscape vast and beautiful but sometimes deadly and changing rapidly, just getting there and getting home was an adventure of it’s own.” Watch the full clip here.