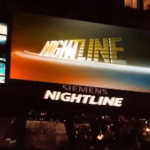 Dan was behind the anchor desk of Nightline last night in an episode that dealt with Christmas shopping wars, paragliding off of Everest and luggage looters. The episode began with tips on how to battle the Christmas shopping wars and ways to avoid being targeted by stores into spending more than you anticipated. The next segment follows extreme adventurers on an epic journey of climbing Mout. Everest and paragliding to the Indian Ocean from the top. This never been done feat is something even the most experienced athletes have trouble wrapping their heads around. The final topic is about luggage looters in airports. Nightline obtained exclusive footage from hidden cameras in the bellies of planes. This footage shows baggage handlers stealing from passengers’ bags. Nightline gives some tips on how to protect yourself from this looting during the holiday season. Watch the full episode here.