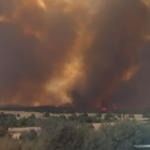 Dan anchored another episode of Nightline last night, which focused on the lone surviving firefighter of the tragic Arizona firefighters. Dan opens, “How did a wildfire cause the deaths of nineteen of the most prepared and bravest firefighting pros? And why did only one of their team of twenty live to tell the tale? It seemed like a manageable fire at first until a shift in the wind changed everything. Tonight, the lone survivor talks to us in an ABC News exclusive about what happened during those final hours, who made those last calls, including the decision that saved his life.” The firefighters were members of the Prescott Fire Department’s Granite Mountain Hotshots, and comprised about 20% of Prescott’s fire department. The survivor, Brendan McDonough, was assigned to be the lookout on June 30, and therefore and wasn’t with the rest of the crew when it was overtaken by the Yarnell Hill fire. He left his post for safety after notifying the men of rapidly changing weather. For more of what happened, watch the full episode, which also features a sit-down interview with actress Jennifer Aniston, here.