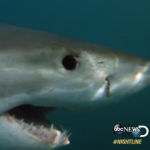 Dan appeared on Nightline last night for a special Shark Week themed episode anchored from the show’s new set. Says Dan of the species, “Their ancestors likely swam our oceans 400 million years ago, well before dinosaurs ever strutted on land: sharks, as ghastly as they are graceful, have proven to be the ultimate survivors. And while much of their innate savagery occurs under cloudy seas, when it comes to attacks on humans, they are high-profile predators with just about every incident making international waves. And these days it’s not all hype, attacks on humans have increased by over 30 percent in the last five years.” So why are shark attacks on the rise? Are sharks really the vicious creatures our culture deems them to be? ABC’s Sam Champion, in partnership with Discovery Networks and the stars of Sharkpocalypse, goes diving with sharks to find out why. Watch his foray into the Atlantic, as well as more shark stories , here.