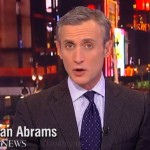 Dan anchored for Nightline on Tuesday, August 5th. This episode began with a deeper look into the disappearance of a 6-year-old girl from Washington as new details unfold. New questions are surfacing about her father and why a full day went by before a search began. Next, Oprah and Steven Spielberg take us behind the scenes of their new movie, “The Hundred Foot Journey”, for a unique look at the film and some secrets you didn’t see coming. Finally, Nightline’s Juju Chang, joins country star, Hunter Hayes, on the road while he attempts to break the world record for the most concerts in 24 hours. Watch the full episode here.