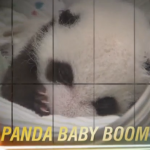 Dan anchored Nightline last Friday for an episode that covered three wide-ranging but hot topics: porn, pandas, and Ben Affleck. Let’s rewind. Disturbing news as incidents of HIV spread in the adult film industry, and Dan asks, “There’s no question that sex sells, but it’s a risky business, and as another adult actor tests positive for HIV, critics are calling for a crackdown… but can those who sell sex really be forced to play it safe?” On a happier note, panda-monium as twin pandas were born to the Atlanta Zoo! Dan says, “Panda baby boom! Meet the first two panda twins ever to survive in the U.S. They’re tiny, adorable, and fighting the odds. We get an exclusive look as zookeepers hold their breath and these picky eaters shake, rattle, and roll to our hearts.” Nightline investigates the intriguing creatures: And mixed feelings on this one — Ben Affleck is the new Batman: “Batfleck backlash: News that Ben Affleck has been cast as the new Batman caused a social media implosion that put Sharknado to shames – why?” Find out more about all these topics by watching the full episode here.