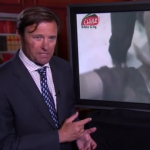 Dan anchored Nightline again last night, in an episode that ranged from the newest Tesla electric car to the continuing violence in the Middle East. Of the latter, heavier topic, Dan says “Was it a horrifying chemical attack in Syria today as rebels say? With possible hundreds dead and death tolls rising in Egypt, is this the end of the Arab spring? …Today could go down in history as the day that changed everything in a war that’s already killed over a hundred thousand people. In Syria, hundreds more are dead, many of them children, but this time it appears deadly chemical weapons were used, although that hasn’t been verified. Potentially one of the worst war atrocities in recent memory. With Egypt also on the brink of civil war, this could be a turning point, not just for Syria, but for the Arab Spring as we know it.” For the story from ABC News’ Chief Global Affairs Correspondent Martha Raddatz, as well as the entire episode, watch here.