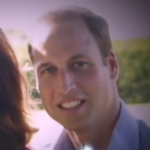 Dan anchored Monday’s episode of Nightline, which featured stories on Prince George and how more American women now own guns than ever, almost 1 in 4. Of the first, Dan says, “Picture perfect: meet the future King of England in the just-released First Family portrait. And in his first interview as a father, Papa Prince William talks about the perils of parenting… He’s been to Afghanistan, worked as a fighter pilot, and lived his entire life scrutinized by the world’s media, but it’s a new challenge that’s leading Prince William to really lose sleep. Yes, little George, his new baby, instilling a healthy dose of fear in the young Prince he’s never dealt with before.” And to the latter, Dan explains, “Girl power: the girl next door is increasingly packing heat, and gun manufacturers are taking notice, marketing guns to women from pink to polka dots… what’s behind the new gender-bending trend?” For this and more, like the latest on Lady Gaga, watch the full episode here.