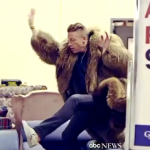 Dan anchored Nightline again last night, in an episode that included segments on an array of topics and even included an interview with hit music sensation Macklemore. Of the rapper, Dan says, “Macklemore is not your ordinary singing sensation. He’s telling us about his long road to fame and why he’s glad he broke all the rules… Imagine a red-hot rapper who, instead of boasting about how much money he has, brags about how much he can save and uses his fame as a platform for spreading a socially conscious platform. Macklemore… prides himself on doing things a little differently; the rap game has never seen anything quite like it.” ABC’s Neal Karlinsky sits down with the “used-fur-coat-wearing, scooter-riding rapper from the not-so-mean streets of Seattle” for an interview worth watching. The episode also includes investigations into family Chuck E. Cheese parties turned violent (perhaps due to the combination of pizza, games, and booze), and laws that potentially jail high school students as a punishment for sex. For this and more, see the full episode here.